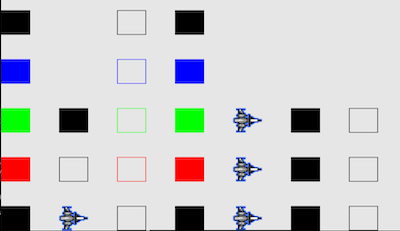 The Dragon Console solves a bunch of problems for us: you can read the logs without jumping to another window, you can read the logs at all on Windows, you can fire-and-forget lines of Ruby code into it, and no engine is truly complete until you can hit the tilde key to slide a console over your game window.  :)

Jokes aside, we think it's just a perfect mix of simple and powerful and hope you'll find it so useful.

We've taken some steps to make it customizable, too; if you feel you need a different font or color scheme, your game can tweak those variables trivially, and make it match your style.

Here's a five-minute rundown on the big idea here, including how it can help you build and debug your games, easy access to documentation, and what to do if you want to control your very own Blue Screen of Death:

And now that you've seen the console, here's Amir showing off the creation of a replay. This is him creating a replay from start to finish in Flappy Dragon. Did you see that we even track where your mouse is and show it during the replay? This turned out to be totally great for replays of the basic samples, too, because we could just slide your attention around the screen to what was relevant with a flick of the mouse.

Enjoy the new build! Amir and I are still going hard on the toolkit, and we'll have more cool things to show you soon, not to mention fixes and improvements that didn't make it into today's build. As always, feedback is the most powerful thing in any toolkit, so pop into the community forum or the Slack channel or even just ping Ryan or Amir on Twitter, and tell us your darkest desires.

...or at least your bug reports!

I just upgraded from version 9 to version 10, but my game stopped working with this new version. I get the following error at startup:

ERROR: Attempted to set the ^ key on the DragonRuby's Keyboard data structure, but the property isn't available. You should contact DragonRuby and tell them to add this key to the @char_to_method hash.
[KeyboardKeys#set, DragonRubyView#char_to_method]

Any way to fix this error? I am not blocked by this issue, but wanted to report the problem.
Reply